Is using cloud storage providers safe for your company’s data?

Since the inception of the Internet, the technology industry has been steadily moving away from local storage to remote, server-based storage and processing -- collectively dubbed as the cloud. Take music and movies, for example; we used to play them from local media, but now we stream them from servers across the internet. On top of that, cloud computing technology provides anywhere-access and sharing of data, with reduced local storage requirements since your files are kept afloat in the cloud.

The question in every business owner’s mind is: How secure are the cloud storage providers I’m working with? Because all your vital business data will be placed in their care. Their ability to keeping your information safe and sound is paramount to the decision-making process.

With a huge array of cloud storage software available on the market, choosing just one can be very difficult. To ensure you make the best decision for your small- or medium-sized business, we’re taking a look at the pros and cons of four popular choices: Dropbox, iCloud, Google Drive, and OneDrive.

Dropbox dropped the ball in 2012 when it admitted that a compromised password had been used to access an employee’s Dropbox account. The password was used to access a document that contained user email addresses, which were subsequently spammed. Although no stored data was compromised, the incident served as a wake-up call to businesses about how reputational damage could impact cloud providers. Dropbox has since improved its login front with an optional two-step verification (via SMS or Time-Based One Time Password applications), which added an extra layer of security to user accounts.

As with other cloud services, Dropbox employees aren’t able to view the content of stored files but can access metadata in order to provide tech support. However, a select number of employees can access stored files for legal reasons. Data in transit is encrypted with Secure Sockets Layer (SSL); and data at rest, with AES-256 bit encryption, to which Dropbox holds the keys. Lost or stolen devices can be removed from your account to mitigate the risk of unauthorized access.

Time and again, Google has fallen victim to security scares involving compromised passwords, which had the potential to impact numerous services. The company once stated that almost 5 million Gmail accounts had been hacked when a database was dumped on a Russian security forum. Since Google Drive uses the same Gmail account login, everything was compromised as a result. Luckily, only 2% of the phished passwords worked and everything was quickly reset by Google.

This illustrates how paramount it is to ensure security for services that use a single account to access multiple services. Google now uses HTTPS on all its services and also implements ‘internal measures’ to keep an eye out for potential compromised account login activity. Additionally, Google also offers two-step verification, and data in transit is encrypted with SSL and data at rest with 128-bit AES encryption.

Despite being cybercriminals' number one target, Microsoft Windows OneDrive has remained relatively free of security breaches. Much of the public concern surrounding OneDrive security revolves around user-error issues such as incorrect file-sharing permissions and password insecurity. Files aren’t shared with others unless you save them in a Public folder or choose to share them. Microsoft reserves the right to scan files for ‘objectionable content,’ which could lead to the deletion of data as well as user accounts.

Many see this as a reason to look for alternatives since security can’t be guaranteed if the provider deems it objectionable. All OneDrive users enjoy two-step verification; however, data is ASP encrypted in transit using SSL but remains unencrypted at rest -- unless you are a OneDrive for Business user.

Cloud security remains a relatively unknown area to many. Business owners need to understand that it’s not all black and white. There are some grey areas, and striving to attain a 100% secure data storage solution is like trying to grab your own shadow; you can get very close, but you’ll never succeed. That’s why we’re here to lend you a helping hand.

We understand that today’s business is highly competitive. That’s why we at Complete Technology offer customized cloud security solutions for businesses looking to stay abreast and one step ahead of the competition. It’s time for your corporation to reach new heights -- take your first step with us and call today. 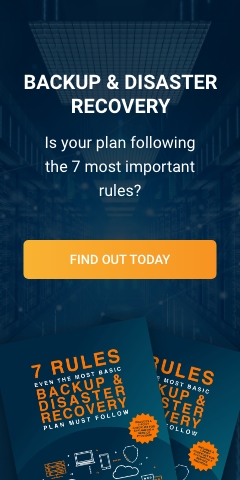